There’s no denying there’s been a definite shift in temperature recently, autumn is here and winter is definitely on it’s way. Here are our top 5 tips for training during this nippy time of year:

Make plans to meet someone for a run, then there’s no backing out if you’re not quite in the mood for it. Making plans will help you to get motivated and stay on track throughout the winter.

2. Dress for the conditions

3. Gone with the wind

Wind is brutal when running, especially in Scotland! Start your run into the wind and finish with it at your back, so the breeze doesn’t blast you after you’ve broken a sweat. To avoid a long, biting slog, you can break this into segments, running into the wind for about 10 minutes, turning around to run with the wind at your back for five minutes, and repeating.

Traditionally a morning runner? Why not try a lunchtime run instead when the temperatures are a bit warmer? Alternatively, try running twice a day, in the morning and in the evening – it’s better than doing one long run where you might get very cold toward the end.

If all else fails, book a flight and head somewhere warm for your Vitamin D fix!

END_OF_DOCUMENT_TOKEN_TO_BE_REPLACED

After what seems like an eternity of cold, dark, wintry evenings, there’s finally some light at the end of the tunnel – the road race season is firmly in sight and spring is on its way! But what does this mean for us runners? Here are five reasons we love spring…

1. Calm after the storm

A wise man once said “You never appreciate spring until you’ve been through a tough winter.” – and it’s the months of battling inclement conditions that makes the longer days, lighter nights and increasing temperatures all the more sweet when they finally come around.

Spring is a great time to build training into your daily commute. Make use of the longer days by integrating cycling or running into your journey and watch your training go to the next level!

While treadmills make a great alternative to outdoor running when winter really bites, there’s no substitute for running outdoors. The changing of the seasons is a great time to get out and get stuck into those forgotten routes from the heady days of summer last year!

4. Time to get serious

Spring marks the start of the road race season proper; a joyous time for all runners! So whether you’ve got a marathon, half marathon, 10K or any other race planned, it’s time to start harvesting the fruits of your labour, scooping up some medals, PBs and most importantly some memories that will last a lifetime!

It’s time for you to come into your own, just like a spring flower. Get prepared to show off those blooming bulbs and brightly coloured petals that you’ve been tending to all winter.

END_OF_DOCUMENT_TOKEN_TO_BE_REPLACED

The festive period is always a challenging time for us runners. As the calendar fills up with work parties and social gatherings, and the kitchen cupboard fills up with mince pies and yule logs, you’d be forgiven for over-indulging and missing out on some running!

But if you’re feeling extra determined this year, we’ve got some top tips to help you keep fit this Christmas, and some dangerous pitfalls to avoid!

If your calendar is chock-a-block with parties, gatherings and family reunions, why not set an alarm and get your run done nice and early? It’s a great feeling having it under your belt and knowing the rest of the day is yours to relax! Will it be cold? Probably – but winter mornings can also be pretty beautiful things to behold.

You might be really enjoying the feeling of keeping fit while family members pour prosecco onto their cornflakes, but don’t go gloating! An endorphin-charged runner sitting on their high-horse is sure to ruffle some turkey feathers.

Get into the spirit

There are plenty of festive fun runs coming up in the next few weeks, so why not get yourself entered into one? Get some friends together, don your Santa hats and reindeer antlers and have a laugh with it!

A few cheeky treats are inevitable and Christmas food is certainly more conducive to steady running than a max out effort! So don’t put too much pressure on yourself, just go out and enjoy running for the sake of running!

END_OF_DOCUMENT_TOKEN_TO_BE_REPLACED 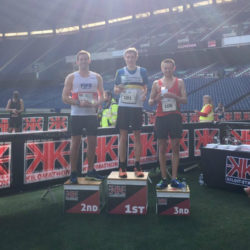 THOUSANDS OF runners took part in Kilomathon on Sunday 9th April. The runners set off from Ocean Terminal before heading past the famous Royal Yacht Britannia, the picturesque Victoria Park and along Edinburgh’s tranquil cycle paths before a finishing straight to remember, in the home of Scottish Rugby – BT Murrayfield Stadium.

David Limmer from Portobello RC, Edinburgh raced to the finish line at Murrayfield Stadium in 44 mins 58 secs to win the 13.1K.

The Kilomathon events are metric equivalents of the marathon distances with Sunday’s races being a half Kilomathon of 13.1K, a quarter of 6.55K and a 2.62K race for junior runners aged 6 to 14.

The first woman home was Dianne Lauder from Hawick, setting a new course record in the 13.1K with a time of 48 mins 25 secs. 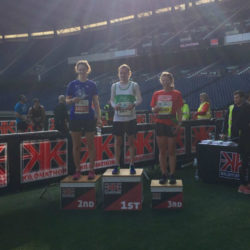 Kilomathon also featured a 6.55K race, won in 25 mins 11 secs by James Wright from East Calder. The first female past the post in the 6.55K race was Lucy Johnston from Dunfermline in a time of 31 mins 10 secs.

Dozens of youngsters took part in the 2.62K Mini Kilomathon race today with Gregor Collins from Galashiels the first male and winner of the overall race in a time of 9 mins 5 secs. The first junior female home was Megan Kyle from Dunfermline in a time of 9 mins 47 secs.

David chose to run for Breast Cancer Care after recently finding out that his Auntie Tracy has breast cancer. Tracy will have to undergo chemotherapy and radiotherapy, and David is aiming to raise enough money to buy her a wig. 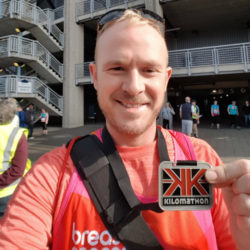 David said “My Auntie Tracey is going through treatment for breast cancer and will be getting surgery for a mastectomy. So far I’ve raised £250 to buy her a wig and now I’m raising money to help support everyone going through the same treatment.”

“I wanted to give something back by running for Breast Cancer Care, I will be proud to run for them and I hope I can make them and Tracy proud by doing so, as well as raising money to help others who are going through their own personal battle with cancer.”

Definitely among the most scenic race series in the UK, the 13.1K race started at Ocean Terminal with panoramic views across the Firth of Forth before runners headed inland, eventually reaching the unforgettable finish next to the west stand at BT Murrayfield Stadium.

Abi Beautyman, Event Manager said “It’s great to see that Kilomathon attracts some of the best club runners around. It’s always an exciting and competitive race with key athletes in the field improving on their times every year. The sun shining on all of our competitors today which undoubtedly added to the incredible atmosphere at BT Murrayfield Stadium. Congratulations to everyone who took part and we look forward to seeing you all again next year!”